Based at the school:

EMSD opened its doors in 1984, as a little studio in the village of Irene (Centurion- Pretoria). Its director Eunice Marais, had just completed her modern dance teachers diploma and had qualified as a school teacher in the same year. For the first 20 years, the dancing school offered modern and jazz only, and in 2004 Eunice decided to explore the “world of Hip Hop” . EMSD dancers started competing in the World Championships (hosted by the International dance organisation- IDO) in 2005 and during the next 10 years achieved hip hop world champions in the solo, duo, small group, formation and production sections. The only studio in South Africa (and probably Africa) to have achieved this.

The Helen O’Grady Drama Academy is the only organisation of its kind in Africa. It was originally founded in 1979 in Australia, when Helen O’Grady, a trained teacher, drama teacher and actress, hired a hall and commenced affordable after school drama classes for young people from 5-18 years of age. 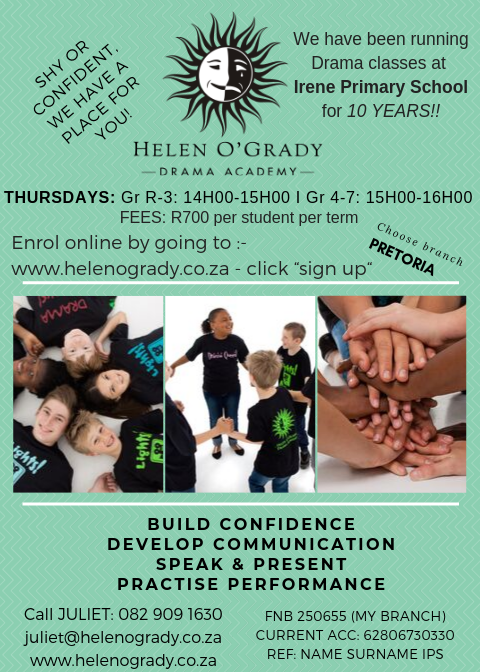 Her legacy continues and the Helen O’Grady Drama System has now become the largest worldwide drama school of its kind. With an extensive curriculum, dynamic teachers and easily accessible venues, this is a truly community-based organisation, with a strong emphasis on the care of all its students.

Students attend fast-moving classes for one hour a week, according to their specific age-group. Parents Days and an annual Production allow parents and guardians to see first-hand the progress of the students.